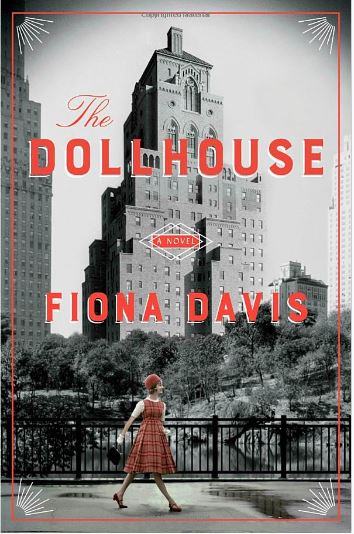 The Dollhouse is set in the Barbizon hotel, the legendary New York City residential hotel that has housed countless young ladies as they climbed the ladder to stardom, including Candice Bergen and Sylvia Plath. The story is told in two parallel sections, one following Darby McLaughlin though her months at the Barbizon in in 1952 and the other following Rose Lewin through her current-day research into what life was like at the Barbizon all those years ago.

Darby was enrolled in the Barbizon’s secretarial school, learning the finer points of typing and answering the phone. She shared the halls with models and editorial associates, very few of which she got along with. She did, however, find a friend in the hotel’s maid, Esme. Darby’s story follows the exploits she and Esme got into in the seedy, underground jazz bars downtown and her rocky path to independence from the expectations of her disapproving mother.

Rose is a journalist, living in a condo in what used to be the Barbizon. Almost immediately into her story, Rose’s romance with an up-and-coming politician comes to a screeching halt and Rose is forced to come to terms with the end of what she thought was just the beginning. During this time, Rose starts researching the mysterious woman who lives in the apartment below hers, the woman who is never seen without her veil. Through a series of ethically questionable decisions, Rose comes to be the caregiver to the woman’s tiny dog and is able to get her hands on some additional information about this mysterious woman.

The bones of this story are good. The premise is interesting, the setup is promising, the ties to actual history are intriguing. But the delivery disappoints. The characters aren’t compelling (really, they’re rather “WTF?!” inducing) and the dialogue is really lacking in the believability department. I came to remember something I was told long ago about fictional dialogue: “Good dialogue in novels is like good referees in sports–you only stop and notice them if they’re bad.” Which is absolutely the case here. The dialogue is used as a way to move the story from Point A to Point B, seemingly without any regard for if someone would actually say that. I was caught off-guard so many times by the utter implausibility of some of the conversations that were happening in this book. Also, we get that Sylvia Plath lived in the hotel for a summer. You don’t need to remind us every other chapter. I promise that we remember.

If you can look past those (many) instances of “c’mon, literally no one would say (or do) that,” you might enjoy this story of love and loss and the search for the truth. I couldn’t though. And so this one was a struggle for me. Sorry, y’all.